Like us, many composers experienced periods in which their work was interrupted by their life. This recital presents pieces by: Gabriel Fauré, the conservatory administrator who relegated composing to the summer months. Ralph Vaughan-Williams who, like many composers, ceased to write during the Great War. Johannes Brahms, who had considered retiring from composition but was inspired by clarinetist Richard Mühlfeld to continue. Peter Lieberson, whose diagnosis of a severe form of cancer, dulled his will to write. And then there was Beethoven, whose ninth symphony had a gestation period that surpassed the writing of the previous eight combined. Production after disruption. A challenge for composer and commoner alike.

When the fabric of life is stretched to the point of breaking, its gaping seams can expose previously unseen constructs and context. This enlarged perspective can be both enlightening and unnerving, threatening the very anchors that secure us to this world. The music presented in this concert witness life overturned, the before and after carving a fault line in how reality is perceived. A new beginning.

The song cycle The Lavender Fields, written by James Moffett for Ariana Chris, offers a clear-eyed view into the composer’s battle with cancer. His candour about the denial, physical pain, and changes described without and within erases the line between composer and listener so that all sit in the seat of a present experience. Peter Lieberson’s (1946 – 2011) songs use the poems of Ranier Maria Rilke (1875 – 1926), and likewise grapple with the space between being and not being. Rilke dresses his poems in the language of nature, into whose porous essence the reader shifts in and out of again blurring boundaries of time and substance.

Between these sets, songs of J.S. Bach (1685 – 1750) and Gustav Mahler (1860 – 1911) stand as pillars. These also meditate on the ancient question of mortality and purpose when studied in the frame of what lies beyond. These venerable masters reminding us that this most cardinal question binds generation to generation. 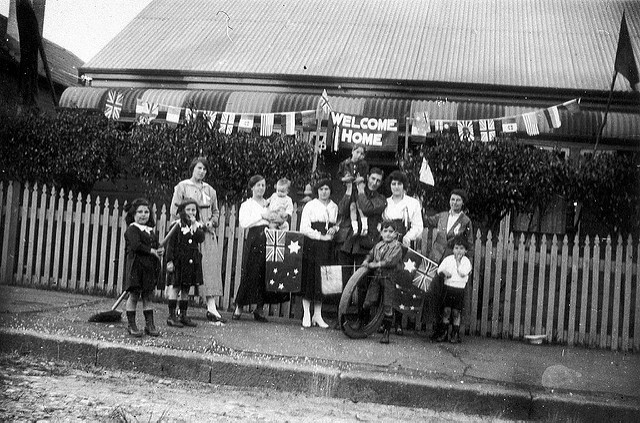 This year marks the centenary of the end of the Great War. This concert presents songs, solo piano music, and poetry from composers and poets of this time, as well as first-hand accounts of the war in the form of letters and other writings from people representing all of the major powers that were trapped in this conflict. All of the songs use the poetry of A.E. Housman’s A Shropshire Lad, a set of 63 poems, a copy of which was said to be carried in many a soldier’s breast pocket. 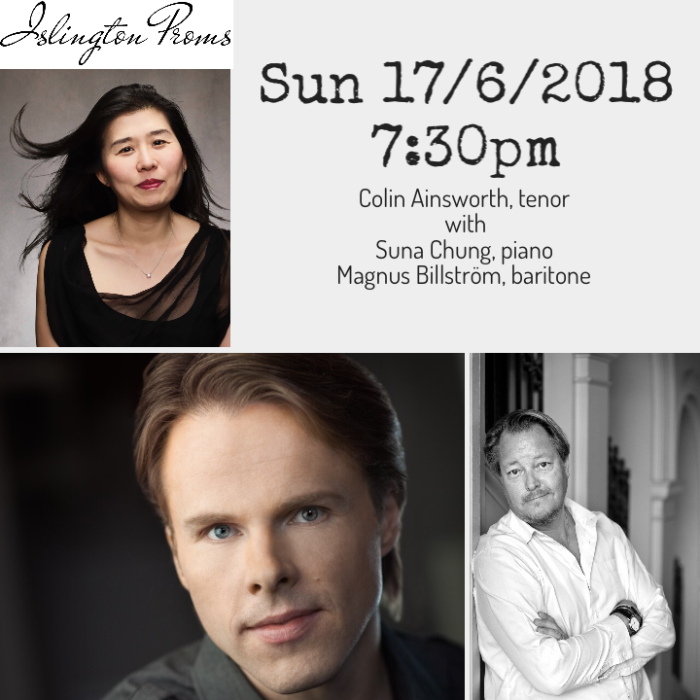 Please join us in at the Islington Proms in London in a concert of sonnets.
Colin Ainsworth, tenor • Magnus Billström, baritone
Suna Chung, piano

They have cost me more effort than any of my other songs.

This statement gains greater poignancy when source and context are considered. Franz Schubert (1797 – 1828) composed over 600 songs, and often (purportedly) with great alacrity. The 24 poems that make up Schubert’s Winterreise were published in three separate iterations by Wilhelm Müller (1794 – 1827): first as a set of twelve poems in 1822 (ending with Einsamkeit), then twenty-two in 1823, and finally in its ultimate form (with Die Post and Täuschung) in 1824. It seems that Schubert came across the poems in their first version  – initially setting the twelve poems to music – before completing the entire cycle of twenty-four poems in the year before his death, 1827.

These poems have been criticised for their absence of a defined plot; Müller’s loose scheme further destabilised by the lack of a trackable sense of time and space. The poems mix past and present, and the entire journey is shrouded in the monochromatic, unrelenting white of winter. Our protagonist is journeying when we meet him and he journeys still when we part ways, effectively nullifying the movement of journeying itself. Instead, this voyage is an inner one, winding further and further into a claustrophobic world which our wayfarer cannot affect.

Schubert’s masterful renderings of these poems respect the simple and direct quality that lie at the heart of the folk poetry Müller so honoured. There is little self-referencing across the songs themselves and the tonal blueprint of the cycle is one that is better understood from a distance, rather than linked by a song-by-song pathway. There is no  perceivable audience present in either the protagonist’s melodic musings, or in the mirrored piano preludes and postludes that bookend them. Nevertheless, this quest contains a force that grows from the quiet of its inevitability, its commonness sharpened by its keenness.

Though the act of reading biography into art can be misleading, this Reise famously contains glints that reflect Schubert’s own. Suffering from the venereal disease (and remedies) that would end his short life, Schubert also looked out on the edges of his own mortality. His ‘effort’ weighed down by the double-edged horizon where both life and suffering cease. “…I may well sing every day now, for each night, on retiring to bed, I hope I may not wake again, and each morning but recalls yesterday’s grief”  (Youens, Retracing a Winter’s Journey, p. 25). 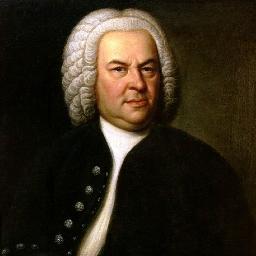 When Martin Luther (1483 – 1546) nailed his now infamous 95 Theses on the doors of the castle cathedral in Wittenberg, October 31, 1517, he took aim at practises accepted, taught, and regulated by the church. Upending the institution’s trickle-down doctrine of rituals and behaviour, Luther instead advocated a religion based on grace and a personal faith. This was not a policy debate, this was a contest for minds and hearts, and one of the chief arenas for this battle was within the service itself. Luther would find no better champion in this struggle than Johann Sebastian Bach.

Johann Sebastian Bach (1685 – 1750), held various church jobs in his lifetime, including his last and longest post at St. Thomas’ in Leipzig from 1723 – 1750. As a result, there are over 200 extant cantatas (used in weekly church services) and two complete passion settings (used for the Good Friday service).

In this concert we will consider the inner workings of the St. Matthew and St. John Passions through the performance of various arias and chorales. Bach’s overarching architecture and ingenious development of musical material are signature marks here, as they are in his compositions for non-liturgical purposes. These aspects assert the unequivocal intellectual force that was Bach’s. But, it is in the ordering of movements, the moments of detailed symbolism embedded into melodic lines, the pathos and emotional breadth that are steeped into the bones of these works, that the profound, personal faith of Bach is revealed.

Bach’s renderings of the passion of the Christ are multi-layered – musically, dramatically, and theologically. The gospel narratives (often sung in the voice of the tenor narrator, though sometimes in another solo voice, or in the chorus) act as the framework onto which are woven poetic texts and Lutheran chorales, which serve as meditations, exhortations, and reactions to the scenes of the passion. Bach’s transcendent settings of these already-familiar passages pull the congregant in, inviting them to partake more deeply, widening the mind and lifting the heart.

A portrait of Heinrich Heine (1797 – 1856) is a difficult one to trace as it incorporates so many opposites. Still, three structural lines in this image would have to be that this most German of German writers spent the last twenty five years of his life in Paris, that this powerhouse intellect was housed in a frail and failing body, and that Heine was a Jewish man in a very Gentile world.

These fed into his perspective as outsider and shaped his lyric poems, which Theodor Adorno describes as “ready mediators between art and an everyday life bereft of meaning”. Instead of solving discrepancies, Heine manoeuvred them to cast light and shadow onto the objects observed. Forever the skeptic and never truly aligned with any movement, Heine was hero to some, enemy to others.

Nonetheless, Heine’s intense brand of Romanticism – a romanticism that dared to look dubiously at its own devices – was a beacon to composers. This recital presents a collection of Heine poems in settings by myriad composers, from Schumann and Schubert, to Liszt, Wagner, and Boulanger. For such a complicated figure as Heine, a refracted picture seems apposite.